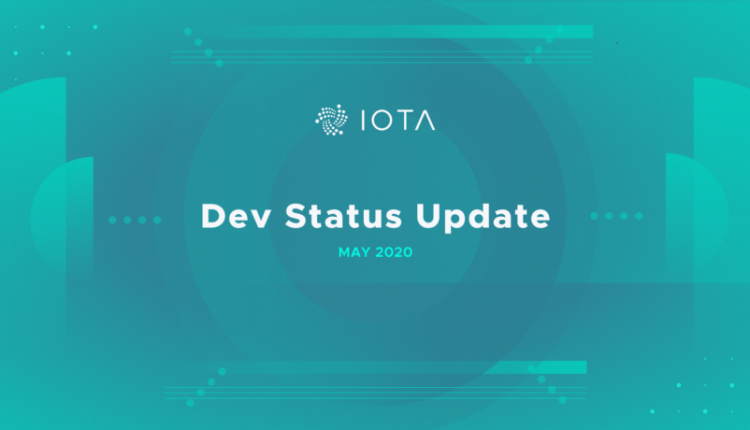 Published by the IOTA dev team every month, this update will provide you with news and updates about our key projects! Please click here if you want to see the last status update. You can also view our complete tech roadmap here.

The IOTA research department also releases a monthly update that you might want to see.

Earlier this month, we released our strategy around Chrysalis (IOTA 1.5), a series of upgrades to the protocol that achieves enterprise-readiness before Coordicide. Since then, the research and engineering teams, together with the Hornet team, have been working on finalizing the specifications for the first Chrysalis changes. You can see the specifications in the linked RFCs, as well as comment and contribute yourself:

The remaining Chrysalis specifications will be drafted in the upcoming weeks.

The Bee team has recently merged 2 RFCs (‘configuration’ and ‘protocol-messages’) and is working in some more (‘network’, ‘sponges’, ‘ternary’, ‘signing’). The team has, with the help of a community member, put together the Bee RFC Book. This will document all the RFCs that have been merged and that make up Bee. This is an approach you may be familiar with from the Rust project.

The RFCs being finalized means that the associated code PRs will be done shortly after.

The Bee team has also started working on White flag implementation in the Bee node.

We are also finalizing the work on the prototype, which we will be releasing in the upcoming weeks.

You can find all Bee RFCs in their respective GitHub repository.

The last RC version of IRI 1.8.6 has been released. We plan on publishing the full release of 1.8.6 in the upcoming days. As noted in this blog post, IRI 1.8.6 will be the last release of IRI that we are actively planning.

With the exception of DB migration capability from IRI to Hornet and general maintenance and support of IRI until the first phase of Chrysalis, no further development work will happen on IRI.

The Hornet team is currently testing the RC version of Hornet 0.4.0. In the past weeks, the team has worked on switching Hornet from using BadgerDB to BoltDB. The current plan is to release Hornet 0.4.0 in the upcoming weeks.

We have recently published an Introduction to IOTA Smart Contracts article, outlining the functionality of our layer 2 Smart Contracts capability. We have expanded the Smart contracts team and its development has been completely decoupled into a separate node called Wasp. Wasp will connect to GoShimmer to access the Tangle.

The team has been integrating the Communication, State Manager and Consensus Operator components of Wasp. Processing requests in batches was introduced to improve smart contract throughput. Mocking the value transaction flow from GoShimmer and UTXO ledger was implemented to test the main features until Value Tangle is completely ready.

The Trinity team has just released Trinity Desktop 1.5.0. This build includes some important bug fixes and dependency updates and addresses the message spam users have been facing. Download it from Github. The team has also released Trinity Mobile 1.5.0. Again, this build includes important bug fixes and dependency updates, as well as adding a transaction filtering and search feature. Download it from the iOS and Android app stores. We have also added an Android APK for users that don’t wish to use Android Play Store.

Meanwhile, the team is working on research, prototyping and specification for the new wallet. Attention has been on devising the underlying Rust libraries, the interaction between Rust and js layers and UI design. The first version of the new wallet will be very much a minimal, core wallet, doing only what is critical to store, send and receive IOTA smoothly. We look forward to sharing our progress here soon.

The GoShimmer team is currently working on integrating and writing tests for FPC with the value Tangle. You can read more about the development of the last research update.

We currently plan on releasing the new version of GoShimmer in June.

You can follow the project on its GitHub repository. If you want to get involved, check out our updated contributing guidelines.

We have published the documentation for IOTA Streams alpha at our documentation portal. The team is now working on improving the implementation to run on existing hardware and exploring how we can reuse some of the components already built for Bee.

We welcome any feedback and suggestions both on the documentation and the functionality of IOTA Streams.

The Permanode team is currently finalizing the first version of the API for the permanode and importing functionality for existing .dmp files.

The plan is to then start testing the implementation as a whole, and begin the IOTA Experience Team process so that we can release the new version of the permanode in a few weeks.

We have made the following updates to our roadmap:

We have launched our roadmap in December and have received a lot of feedback since. We plan on going through all the suggestions and improve the website in the coming weeks!

As always, we welcome everyone to stop by on Discord — every project mentioned here has a channel (or more) for discussion with the devs!

The full article was originally published by Jakub Cech on Medium, where people are continuing the conversation by highlighting and responding to this story. Read the full article here.
chrysalisIOTAIOTA Newsresearch-and-developmentsoftware-engineeringtechupdates