University of Bayreuth are developing an IOTA-based platooning prototype

Students of the University of Bayreuth are developing an IOTA-based platooning prototype at the Fraunhofer Blockchain laboratory.

The team from the Fraunhofer Blockchain Laboratory of the project group Business Information Systems at Fraunhofer FIT has presented their latest development, a prototype for the transfer of data and financial transactions between cars.

Platooning describes a process in which two or more vehicles drive at a very close distance behind each other. The basis of this process is the exchange of sensor data between the participating vehicles (such as distance sensors and the automatic control of the steering wheel or the accelerator pedal). As a result of the data exchange, the vehicles are digitally coupled to each other similar to an electronic drawbar and can form a column. For subsequent vehicles so a teilautonomome ride is possible. The resulting savings (such as slipstreams or rest periods) are reflected in a compensation system. So platooning enables the experience of autonomous driving, without having to give full control to non-human systems. 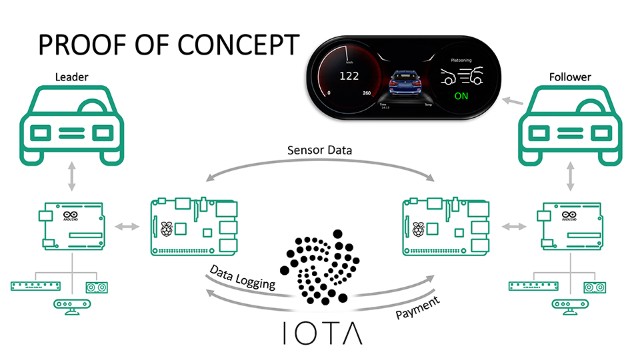 The young developers Matthias Babel, Jonas Brügmann and Nicolas Ruhland, together with the scientific assistant Jannik Lockl under the direction of Prof. Dr. med. Gilbert Fridgen built an innovative prototype that shares sensor data in live operation as well as the payment flows using »IOTA«. IOTA is a further development of blockchain technology, designed for machine-to-machine communication. For better illustration, the team also developed autonomous model cars to test the concept. With their development, they are showing the way how platooning could be implemented in the fragmented automobile market in the near future. Their prototype opens up a new perspective towards the future of autonomous driving, where platooning represents the transition to fully autonomous transport.