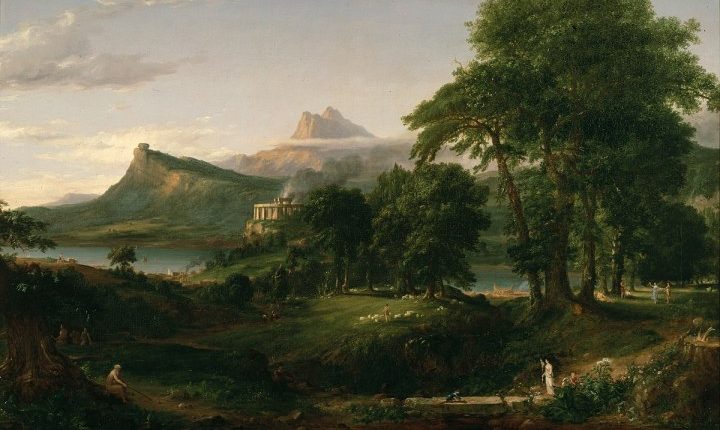 We are all children of our time. Everything we have today is normal to us, but this is an illusion. Hot water from the tap wasn’t there 50 years ago, in some areas not even running water. Houses from the eighties have very few sockets, compared to the current demand. Cabling for internet or tv isn’t tucked away nicely into the wall. We are now taking steps towards a machine economy. At companies, universities and Hackathons around the world people are contributing to this new ecosystem, this new society. When envisioning a new ecosystem it is important to let go of what is, and dive deep into what wow’s. 1

This post is written as inspiration for the Machine Economy track at the Blockchaingers Hackathon. The challenge is to make a new narrative for a future machine economy that is beneficial to society. I want this post to inspire you, and anyone else who want to change current society, to let go of what you think is true and create the world that you want to live in.

In 1516 the lawyer and social philosopher Thomas More described a fictional society of abundance in his book Utopia. His biggest achievement to me is that he dared to let go of the paradigm of his time; 16th century England. He envisioned a new social structure where there’s a different conception of currency and status. Can you let go of current paradigms when you design a machine ecosystem for the future?

What kind of society do you want to live in? What is important here? What should have value?  Thomas More criticized how (rich) people value ‘false honours’ such as gold and gems, which have very little value in and of its own. They only have a perceived value. Therefore, in Utopia he made gemstones worthless. How? By making it something children play with. It is nothing more than a colorful rock used in children’s games. And what respectable person wants to decorate themselves with toys?

Utopia is a fictional country where everybody contributes according to their ability. Therefore they only need to work 6 hours per day to have enough. The people live in abundance: they have enough food, clothes, time to study, time to play, time to sing and dance and socialize. There is no unnecessary hoarding because everyone trusts that their needs will still be met tomorrow, next week and next year. There’s enough, because nobody is slacking, and everybody contributes to their ability.

This is also how nature works. When animals go hunting in a group there is no middle and upper management making outrageous plans, taking notes of performance, sitting in their office working on a grand vision and mission. Everyone participates as best as they can. Everyone shares the food. The sick and weak are cared for, without exception. We are told nature is cruel to the weak and sick, but in reality this is quite far from the truth.

A bigger piece of a smaller pie

One way to create a fair machine to machine-ecosystem could be to look at a balanced natural ecosystem, showing what we want as a society, and transpose this onto human society. Nature shares, cooperates, adapts, use all available resources without monetary transactions. See for example how forests do it.

Natural ecosystems work for the greater good because it benefits the individual in the long term. Everybody gets a small piece of the pie, but the pie is much, much bigger.

Having your needs met

If you draw a parallel to our current society: is ownership necessary to get our needs met? Intuitive answers aside, do you really want to own a drill for instance? Or do you want to be able to drill a hole at your convenience? Or do you just want the hole to be there? 2

There are already plenty of examples of sharing economy for cars or transportation – such as Uber, Greenwheels, BlaBlaCar. These initiatives are however usually profit based companies. Could they instead be community owned? A ‘No profit’-motive could give a host of benefits to society at large, such as Universal Basic Income. 3 It applies to any machine or service, not just cars. If a company’s profit margin and short term thinking – focusing on quarterly numbers to please the stock market – is no longer a given, our society could look very different. A machine economy that contributes to UBI can be a big step towards a society with less fear, less poverty, less inequality – a bigger pie.

A new way of thinking

Part of the problem is how to get people to think differently. Visualizing your ideas and examples in the Hackathon could help others understand these ‘crazy’ concepts and see that a different society is possible. 4 Think of how Star Trek, The Jetsons and Back to the Future inspire innovation. 5

When you’re designing your machine economy; your vision of a future ecosystem, try to let go of the current paradigm. When you’re in a hole, there’s no use in digging. If you’re stuck, ask yourself: “How does nature do it?”, and take a different path.

This post is part of a series providing inspiration from nature for participants at the Blockchaingers Hackathon, specifically for the Machine Economy track. Read more about:

The full article was originally published on IOTA Untangled, where people are continuing the conversation by highlighting and responding to this story.
BiomimicryBlockchaingers HackathonDesign thinkingEcosystemIOTAIOTA Newsmachine-economyNew paradigm

Integrate everything with IOTA Contest