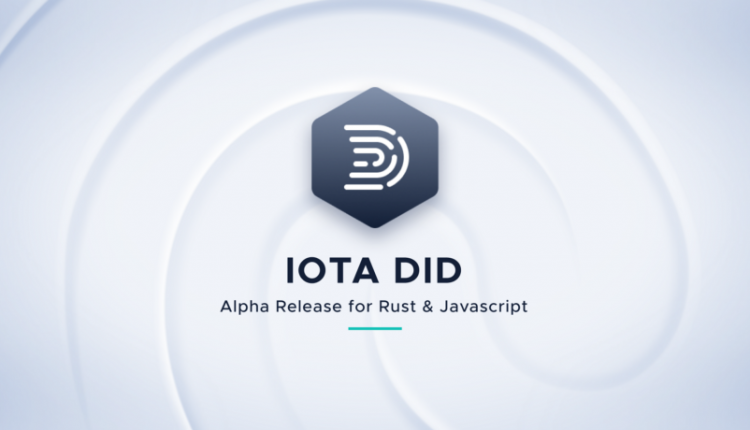 Decentralized Identity (or Self Sovereign Identity) is a popular topic in the field of Distributed Ledger Technology (DLT) with over 75 implementations of the DID standards being submitted to W3C. It is an enabling technology for DLT, as it allows the creation of trust through identification in an online setting. This is crucial for both the internet and DLT as identifying who you interact with online can prevent many cases of fraud, disinformation, and distrust. With IOTA Identity we make an important step towards the adoption of both IOTA and DID due to the unique ability to pay and identify in the same feeless protocol. If you are not yet familiar with the concepts described above, we highly recommend reading our whitepaper or watch our latest EclipseCon talk on the subject.

In this blog, you will find the alpha-release of IOTA Identity, open-sourcing our Selv app, and the announcement of the Identity X-Team. For those that participate at Odyssey Momentum, we also prepared a hackathon package near the bottom of this blog.

We are excited to announce the release of IOTA Identity Alpha. At this stage, the proposed standards for Decentralized Identifiers (DID) and Verifiable Credentials by the World Wide Web Consortium (W3C) are implemented in full. The implementation of these specifications is a fundamental layer for building an SSI framework. You can find the code in our repository identity.rs. This contains both the full Rust implementation and Web Assembly (WASM) bindings, which can be used both in the browser and Node.js environments in Javascript / Typescript. The current Alpha release is an early version and does not contain the level of documentation, code examples, and higher-level functionalities that we would ideally like, but that will be improved upon in the next few weeks.

For the remainder of the year, the team will focus on improving the IOTA Identity framework to prepare for the full 1.0 release. We will implement a higher-level library that wraps most of the complicated functions into easier, but less flexible functions. This should be sufficient for most of the applications that you might build on top of the IOTA Identity framework, otherwise, you can always access the lower level functions directly. In addition, we are working on implementing DID communications messages that allow different devices, programs, and platforms to interact in a standardized manner, allowing your custom apps to directly interface with Selv or other compatible applications. Lastly, we will improve upon the documentation and make it easier to use the framework.

Once again, I would like to thank huhn#8105, Thoralf#3558, and Tensor#2912 for their amazing work on identity.rs under the Ecosystem Development Fund (EDF) grant with the support of our amazing colleagues at the IOTA Foundation such as Devin Turner and Daniel Thompson-Yvetot.

As part of the hackathon package, we are open-sourcing the Selv app. Selv is the identity wallet developed by the IOTA Foundation. It is currently used for the Selv: Health passport demo and will be used for multiple demos. It allows people to store and share verifiable credentials with the demo websites or peer-to-peer with other Selv users via a QR-code. This is only the beginning for an identity wallet but should allow sufficient functionalities for an IOTA Identity based hackathon project. The repository includes a useful tool for generating new verifiable credentials and an associated QR Code which you can render on your pc and scan with the Selv app to transfer directly into the app. This workflow allows you to develop your own SSI demo with just a few commands.

Open sourcing the app was a long-promised step we still had to take, but it was delayed due to some required code restructures that were hard to prioritize during all our other work. Fortunately, we have recently received amazing community code contributions from Eike Haß, who is doing his master thesis about Selv. Adjacent to the IOTA Identity developments, we will be making more improvements on the tooling around Identity to foster the ecosystem.

Tomorrow marks the kick-off of Odyssey Momentum, the 4th installment of the largest DLT/A.I. hackathon in the world. Last year, we saw nine teams who used IOTA in their solution, of which three teams won their respective challenges. As Self Sovereign Identity (SSI) is a popular topic at Odyssey to resolve the many different challenges, we have been hard at work at preparing a bunch of earlier than planned releases related to IOTA Identity in time for the hackathon.

We have prepared a minimum viable SSI stack for the participants of tomorrow’s Odyssey Momentum. The release of IOTA Identity Alpha contains the following components:

If you have any questions during or after the hackathon about IOTA Identity, join us at discord and join the #identity-discussion channel. At Odyssey, you can also request assistance from our Jedis Dave de Fijter and Sebastian Heußer or tag them at the Odyssey Momentum Discord.

This is also an excellent opportunity for anyone else to familiarize yourself with IOTA Identity as we will soon be announcing further inquiries into the topic together with our community. We believe that IOTA Identity will not only impact how we use our identity from a technical perspective but also how we perceive our own identity and connect to the world around us. We look forward to exploring not only technological but also social and economic implications of SSI in the long-term together with our community. Stay tuned for more information on how to get involved!

In addition to the code releases, we are also happy to announce the launch of the IOTA Identity Experience Team. The X-Team members are active contributors to the ever-growing IOTA Ecosystem. Many of them already have personal projects that are planning to build on IOTA Identity such as Society2 and Deposy. X-Team members speak as a voice for the community. Working alongside IOTA Foundation members they will become intimately involved in preparing tools, libraries, and documentation for the IOTA Identity framework.

Join us at Discord on the #Identity-discussions channel.

The full article was originally published by Jelle Millenaar on Medium, where people are continuing the conversation by highlighting and responding to this story.
announcementsdigital identityIOTAIOTA Newsrustself-sovereign-identity